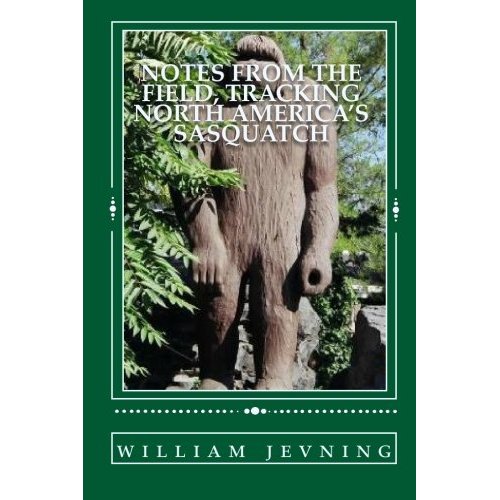 My book available on amazon.com covers the issue from the fossil record through historical accounts to my own field work.

My book available on amazon.com covers the issue from the fossil record through historical accounts to my own field work.

Jevning’s book makes the case for the existence of Sasquatch, also known as Bigfoot, through a variety of sources NOTES FROM THE FIELD (reviewed on May 1, 2011)

, from historical to anecdotal.

Jevning divides his book into two parts; the first section relaying the history and first attempts to track Sasquatch, the second concentrating on modern anecdotal accounts and scientific evidence. The idea of simian animals living in North America dates back more than 400 years; Native American peoples have long told stories of hairy, manlike creatures in the woods. Since then, there have been hundreds of similar reports in newspapers, ranging from the 1800s to the present. Jevning has collected many of these stories and presents research he has conducted on several of the “major” incidents, such as the famous 1967 film footage of a walking Sasquatch. From this point, Jevning talks about his sighting a Sasquatch at a young age, his involvement in the Sasquatch-tracking community and his personal field research and findings from the last 40 years. While Jevning would be the first to agree that there is no hard evidence supporting the creatures’ existence, the sheer amount of personal accounts and historical research he has culled is impressive. Newspaper stories from the late 1800s and early 1900s not only give weight to his case, they also provide a fascinating look at how such incidents were responded to by the media of the day. In cases of incidents occurring after the 1950s, Jevning has located and interviewed the people involved. These interview portions of the book (written in a question and answer format), while informative, can be meandering and make the book’s pacing a bit rocky at times. While Jevning is clearly a believer and enthusiast, his tone is always evenhanded, addressing incidents that he believes to be faked and giving as much factual information as he can to back up his claims. The latter half of the book, chronicling his experiences alongside some of the first people to investigate Sasquatch, effectively pieces together the physical character of these creatures, as well as what their habits may be.

Writing with experience and thoughtfulness, Jevning gives an intriguing glimpse into the mystery of Sasquatch.

“Notes From The Field, Tracking North America’s Sasquatch” by William Jevning is my favorite Bigfoot book of all time.

It’s not easy to impress me. I’ve read a lot of mediocre books that get no evidence across and ones that talk in vague broad strokes of folklore and regional BF’s, but this book amazed me from the moment I opened it. It possesses a lot of sketches, tons of pictures, covering everything from the Native American legends to modern-day encounters.

The author covered everything from the history of BF to signs of his behavior, signs of his biology, interviews, witness sketches, and tons of evidence all tied up into one reference book. It reads like those great BF documentaries I love. I wanted more. In fact, I’d really be happy to have the book made into a documentary. There was evidence in this book I had never seen or heard about.

Honestly, if you love Bigfoot, this is THE book to own. I cannot seem to put it down. I get so lost in it, I forget time and duties. That says a lot because these days, I can’t sit through a whole movie.